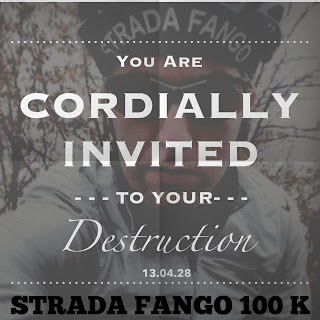 I haven't gotten around to finishing up a Ragnarok 105 report just yet, the week has been busy. I feel it's necessary and urgent that I fill you in on some details regarding next Sunday's Strada Fango...

As Guitar Ted has reported, this has been a tough year for the gravel grinding folks in the midwest. Many of the early spring classics have had some horrendous (read - "epic") conditions, and many are postponing or even cancelling! Well...yesterday I was contacted by the race director for the Strada Fango. He is very, very close to cancelling as well, but still insists that THE SHOW MUST GO ON!

I was asked to whip together a quick gravel grinder in The Blue Hills. Having considered hosting a gravel grinder of my own, I had an assortment of courses and rides that I've done in the past ready to throw on the table. There's an alternate course at hand. After some scouting this weekend, and a strong possibility that THE SHOW WILL GO ON, I assure you folks...The 2013 Strada Fango will not disappoint.

A good friend of mine gave me this awesome gift for standing up in his wedding. I've read nothing but great reviews, and from what I've seen so far it takes some pretty awesome videos for such a little camera. A helmet mount is in the mail...so I'll be uploading some videos soon, hopefully adding a nice spin to this blog.

Posted by Blue Hills Biker at 6:02 PM No comments:

I hate to be the blogger who simply regurgitates videos posted by others, but this one has to be worth sharing. Incredible.
Posted by Blue Hills Biker at 5:40 PM No comments:

Here's an article in the local newspaper about our Tuesday night group ride. More riders are encouraged to come out!

http://www.ricelakeonline.com/main.asp?SectionID=32&SubSectionID=113&ArticleID=22273
Posted by Blue Hills Biker at 12:59 PM No comments:

Clearly, this blog has been neglected for quite some time, and that's probably an indication that my riding has been neglected as well, as the bulk of this blog is supposed to be about cycling. No riding = no blogging. If I compared the intensity of racing and riding that I was doing this spring to what I am doing now, you could almost say I don't even "ride bikes" anymore.  June and July have essentially been "rest months"...albeit much needed ones.  I made it out for a few local Tuesday night group rides (most of them 50 milers), and I managed to squeeze in a 250 mile week (including 1 century in there) in late June after building up the trusty Merlin roadie, but outside of that...I've certainly been slacking.

Overall, since the two lovebirds got married on June 11, the summer has been...interesting...to say the least.  While I definitely reap many benefits from riding, there are certainly times when the structure and rigidity of a hard training/riding/racing schedule isn't conducive to learning other lessons that need to be learned in life.  So, I've temporarily taken a break from the hustle and bustle of racing, and have taken advantage of the spontaneity that surrounds a young guy's life with few real commitments, such as a wife or children, etc.  Ahhh...it has been quite the summer.  However, truth be told this phase of life must round off.  It's time to hit the hard reset button.  "Bigger picture" goals and fitness must get back on track.

I'm on the waiting list for the Heck of the North on October 1st, which I hope opens up.  Then I'm on the roster for the Dirt Bag on October 29th. Ultimately though, if I'm still living in Wisconsin by late December (debatable), my focus will be on redeeming myself from 2 years ago at the 75 Mile Tuscobia Winter Ultramarathon.  Folks, it's go time...